Isle of Wight Lavender – a national collection by Ruth Ridley

A herb grower on the Isle of Wight

I was on the Isle of Wight in August for a mini-break with my husband, so thought I’d pop in and have a look at the national collection of lavenders. It was lovely to meet Reuben, whose family has been on the island for hundreds of years, and running the farm since 1927. The farm diversified when Reuben’s mother became interested in growing dried flowers. They started growing lavender and looked into extracting the oil, which is now used in a range of toiletries and cosmetics sold in their shop.

Reuben grows well over 100 varieties of lavender for the national collection, which is monitored by Plant Heritage. He was telling us how he had suffered with the weather over the last year, even on his sloping site where the well-drained soil resembles the natural environment of lavenders, which originate in mountainous regions around the Meditteranean. His lavender garden was beautiful, with many Lavandula x Intermedia and Lavandula Stoechas varieties still in flower late into the season. These herbs were attracting the bees by the dozen! 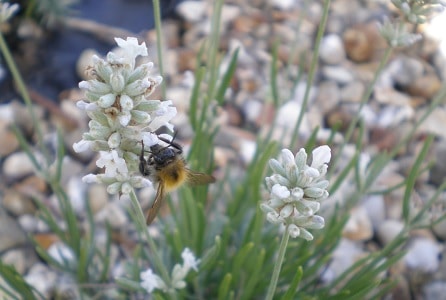 When we arrived the garden was in the process of being improved by the addition of arches, scented roses and visitor-proof labelling. It is very important for varieties in a national collection to be clearly labelled, so it can act as a reference for future growers, but try telling this to garden visitors such as toddlers and over-enthusiastic shoppers!

Isle of Wight Lavender is open free of charge, and has a shop and tea-room.