I photographed these in the dunes whilst walking on the west coast of Jersey with a friend.  It was wonderful to see how many flowering herbs had settled naturally there.  The hips (fruit) are noted for their high element of Vitamin C.  As a post war child, well I remember queuing up with my brothers on a daily basis for our spoonful of cod liver oil, followed by a spoonful of rose-hip syrup to wash it down!  With almost no sweets or junk food, and three solid meals a day, how healthy we must have been. 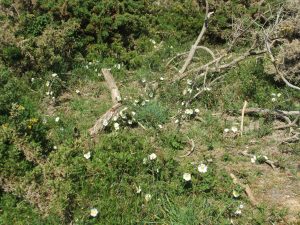 There are many medicinal uses, but another example is that the tea can be drunk for the treatment of viral infections and disorders of the kidneys and urinary tracts.  The tea can be made with a spoonful of dried rose petals allowed to steep in a pot for five minutes before drinking.  You can dry and store the petals yourself.

The quantities in my recipe are rather large.  I’m sure you can use less rose hips and reduce the fluid and honey accordingly.  But the ratios are:  4lbs of rose hips, 9 pints of water, and 1lb of honey for every 1.5 pints of liquid.  Bring two thirds of the water to the boil, mince the rose hips, or finely chop them in a blender.  Drop into the boiling water and bring back to the boil. Take the pan off the heat and leave to cool for 15 minutes.  Strain, retaining the liquid, and put the pulp back into the pan.  Bring the rest of the water to the boil in a separate pan and pour over the pulp.  Stir and leave to cool for ten minutes.  Strain the liquid and add it to the first batch of liquid. Measure the total amount and return it to the rinsed out pan with the relevant amount of honey.  Bring to boil, and boil for 5 minutes.  Pour the syrup into hot, sterilized bottles and seal immediately.  It will keep for up to a year in a cool place. 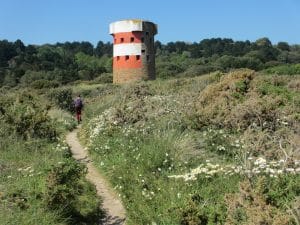 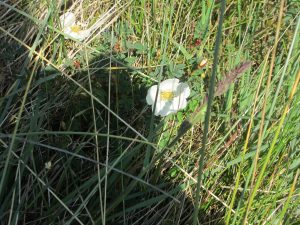 Teas and syrups are well known recipes, but I have a recipes which include rose hip pie (the hips are used instead of fruit), rose petal sandwiches, and rose hip marmalade.  I’m looking forward to the hips appearing!