Ayurveda and Below Ground Veggies

Ayurvedic medicine is one of the oldest systems of medicine still in use today, and was passed from Brahma, the creator god of Hinduism. A holistic system, with eight separate branches, at its core is the aim for balance of the body, mind and spirit. With winter still with us, this blog discusses a specific area of Ayurvedic medicine, and explores how the current seasonal veg crop can affect that balance.

At this time of year, many of us in the UK are eating more root vegetables than we might do at other times of the year. There is lots of science out there about the benefits of eating root vegetables but if we want to think about how their effects differ depending on an individual’s constitution then Ayurvedic Medicine might offer some clues as to the things we need to consider.

How is Ayurvedic Medicine Connected to Food?

Ayurvedic medicine is a system of traditional medicines native to India. It is based on the idea of connection between life, food and the body and focuses on promoting balance between the mind and the body.2 Whether a person eats foods that are wholesome or not eventually leads to that person being happy or miserable. This makes diet an important part of Ayurvedic medicine, and depending on the illness, sometimes dietary changes alone may be enough to relieve the condition.1

Treatment through diet in Ayurvedic medicine not only concerns what the food is and its nutritional content but also considers how the food is consumed, when it is eaten, the process of cooking and the other ingredients that are combined with the food, as well as the season and surroundings. All of this information is blended into a personalised approach to suit each individual.1

Indian foods are traditionally separated into three groups: the first group is foods for the truly wise – cooked vegetables, milk, fresh fruits and honey. These are called Satvika foods. The second group are foods that bring out the worst qualities in people – meat, alcohol, garlic, spicy and sour foods, called Tamasika foods. The third group are foods that give people enough energy to carry out the tasks for the day. These are the Rajsika foods.2

The foods groups listed above are used in various ways depending upon the illness to be treated. In palliative treatment they may be used to restore balance to the doshas (humours) or they could be used to promote nutrition in order to modulate the immune system and make sure medicine-based treatments are effective. Diet can also be combined with daily routines, activity and sleep to promote wellness or remove toxins from the body.2

The way that Ayurvedic medicine is personalised is by using the three doshas. These are called Pitta, Vata and Kapha. When out of balance, one dominates the body. A Pitta body type is characterised by a medium body and intelligent, hard-working people who may be likely to suffer, for example, from heart disease or indigestion. Vata people have a light frame and are creative and energetic but may be likely to suffer from illnesses relating to digestive issues or anxiety. Kapha is characterised by people with a sturdier frame who tend to be calm and loyal but who may suffer from illnesses relating to asthma, diabetes or depression.3 The foods suitable for people characterised by each of the doshas must therefore, be able to support them in different ways. Let’s think about root vegetables as an example of how food requirements may vary for people characterised by each dosha.

What Counts As A Root Vegetable?

Radishes(Raphanus sativus) are a member of
the Brassicaceae, or Cabbage, family. The taproot can be eaten in salads, pickles and curries and the above ground parts are also edible. All parts of the Radish have nutritional and medicinal properties. Traditionally, the conditions they have been used to treat include liver inflammation, stomach disorders and urinary infections. More recently they have been found to have antimicrobial, anticancer and antioxidant affects (although the effects do vary from variety to variety).4

Daikon radishes are a long, thin, white Asian radish that is sometimes seen in supermarkets in the UK. A rarely seen (in this country) but highly, nutritive radish is the Black radish. Apparently, the Black radish has an earthy, horseradishy taste, not particularly pleasant, but it is used widely in Asian medicine to stimulate bile production and support the liver.

Benefits of Other Root Vegetables

Other species of root vegetables include Beetroot and Chard, Carrot, Turnip, Parsnip and Swede. You may be wondering about the Chard since it is a leafy vegetable, it was actually produced as a hybrid from Beetroot. Chard does not have the large purple root of Beetroot but does have the same pigments in the stem. I’ve included it here because this gives Chard similar constituents and properties to Beetroot.

Many root vegetables have liver cleansing, and hence skin cleansing, properties. The more pigmented the root is the more potent it is likely to be. This is because the pigments are constituents such as anthocyanins and flavonoids, which are known to be anti-inflammatory and antioxidant.

Which root vegetables a person should eat depends on the dosha that characterises them (Table 1). The foods should then be processed and eaten in a certain way to ensure the most effective digestion. For example, people characterised by Vata should have warmer foods to balance them and make sure the food is cooked, moist and combined together in one-pot before it is eaten to aid digestion. A person characterised by Pitta may do better with foods that are more sustaining and cooling but they can also eat heavier foods (the Daikon radish and raw radishes are pungent and warming so are not appropriate for this dosha). For a person characterised as Kapha the food should be light, dry, warming and energising (this explains the inclusion of all the pungent radishes and lots of starchy roots).

Table 1: Root vegetables that can be eaten or should be avoided depending on which dosha characterises a person.5 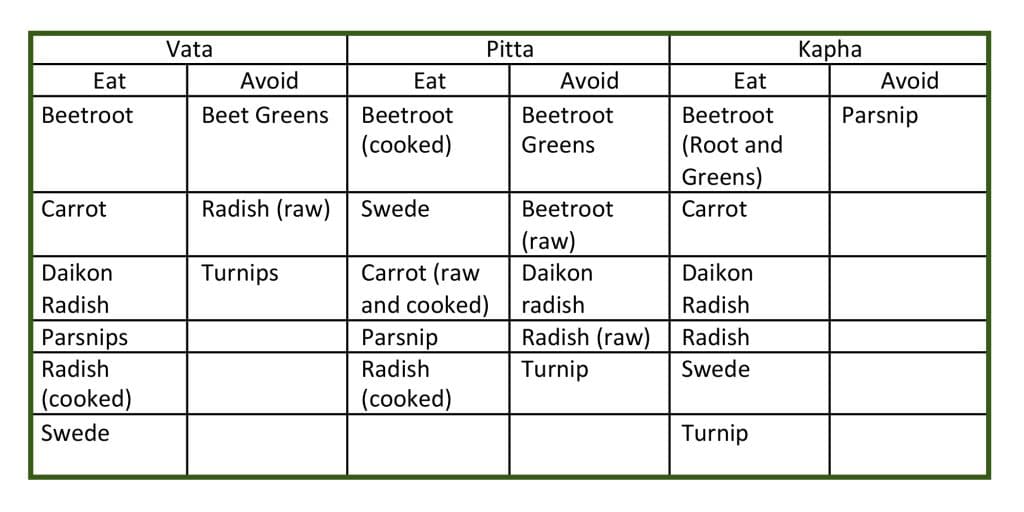 Ayurvedic Medicine treats all foods in this way – separating the suggested foods into ones that should be eaten or not depending on a person’s dosha. This means dietary advice given through the Ayurvedic system is more individualised than the dietary advice given through our modern system sometimes seems to be. Maybe this is a good idea. After all, everyone’s an individual. There probably isn’t a one-size-fits-all healthy diet out there. Maybe we all need to think a bit more carefully about the food we’re eating and how it suits us? What do you think?

Helen is a freelance copy and content writer, enthusiastic about science and history. To learn more about her work visit her Linked-In profile. Helen has also been writing our Herb Histories series and is a Herb Society member.

Note: The Herb Society UK always advises that you consult a licensed practitioner of any alternative medicine before starting treatment. This blog is written for educational purposes only and should not be interpreted as medical advice.

Hildegard of Bingen: To Be Lost and Found