Live and let live in the garden

Many flowering herbs do have a tendency to set seed, often in the most unlikely places. In my garden, I believe in letting seedlings stay where they are until I can identify them! 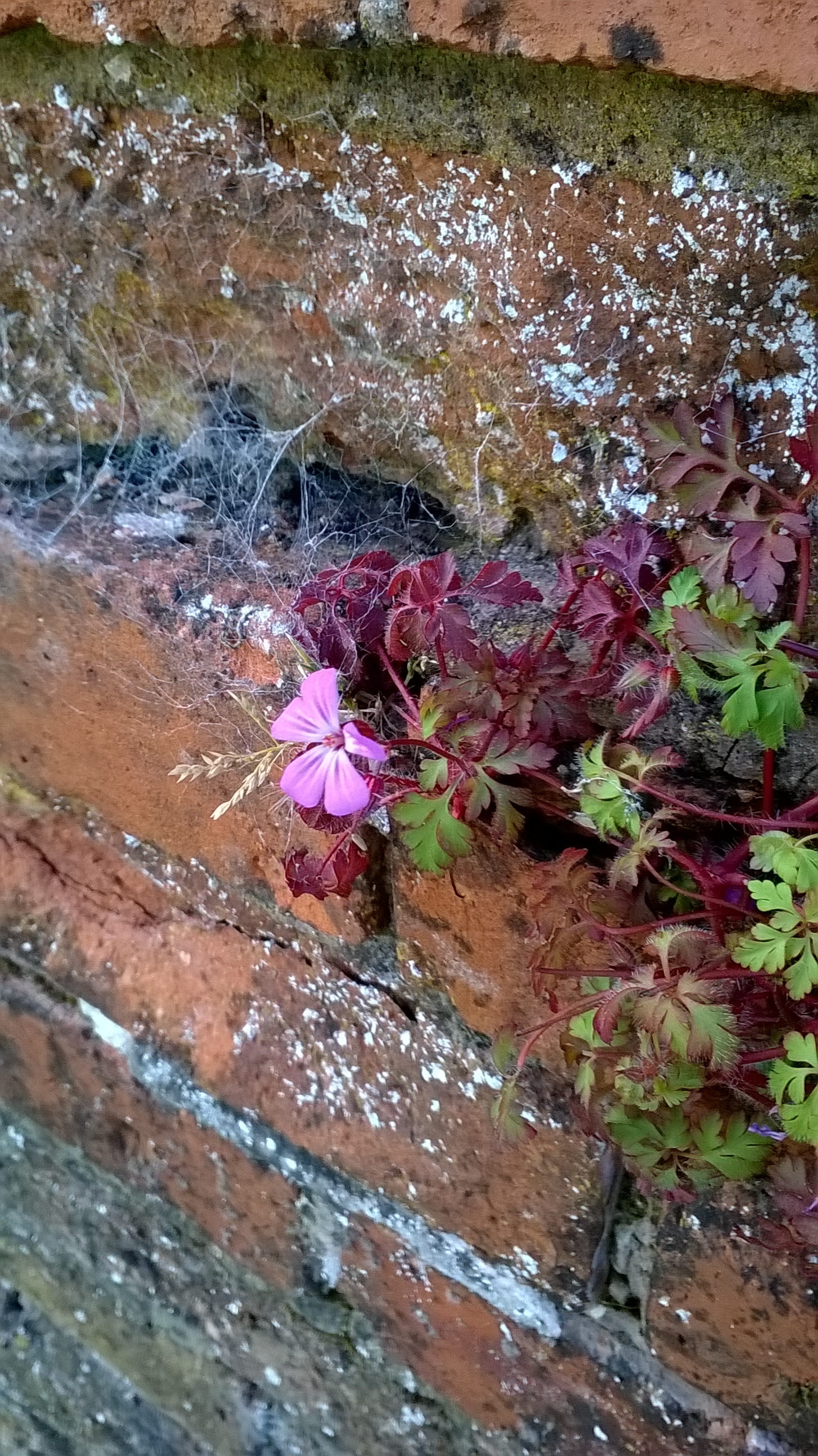 Herb robert, Geranium Robertianum, readily self-seeds into cracks in the wall, and was traditionally used for toothache, nosebleeds and healing wounds.

Herbs in the veg patch

There is a lot of bare soil in my veg patch in early spring, and a few herbs have been known to colonise it! 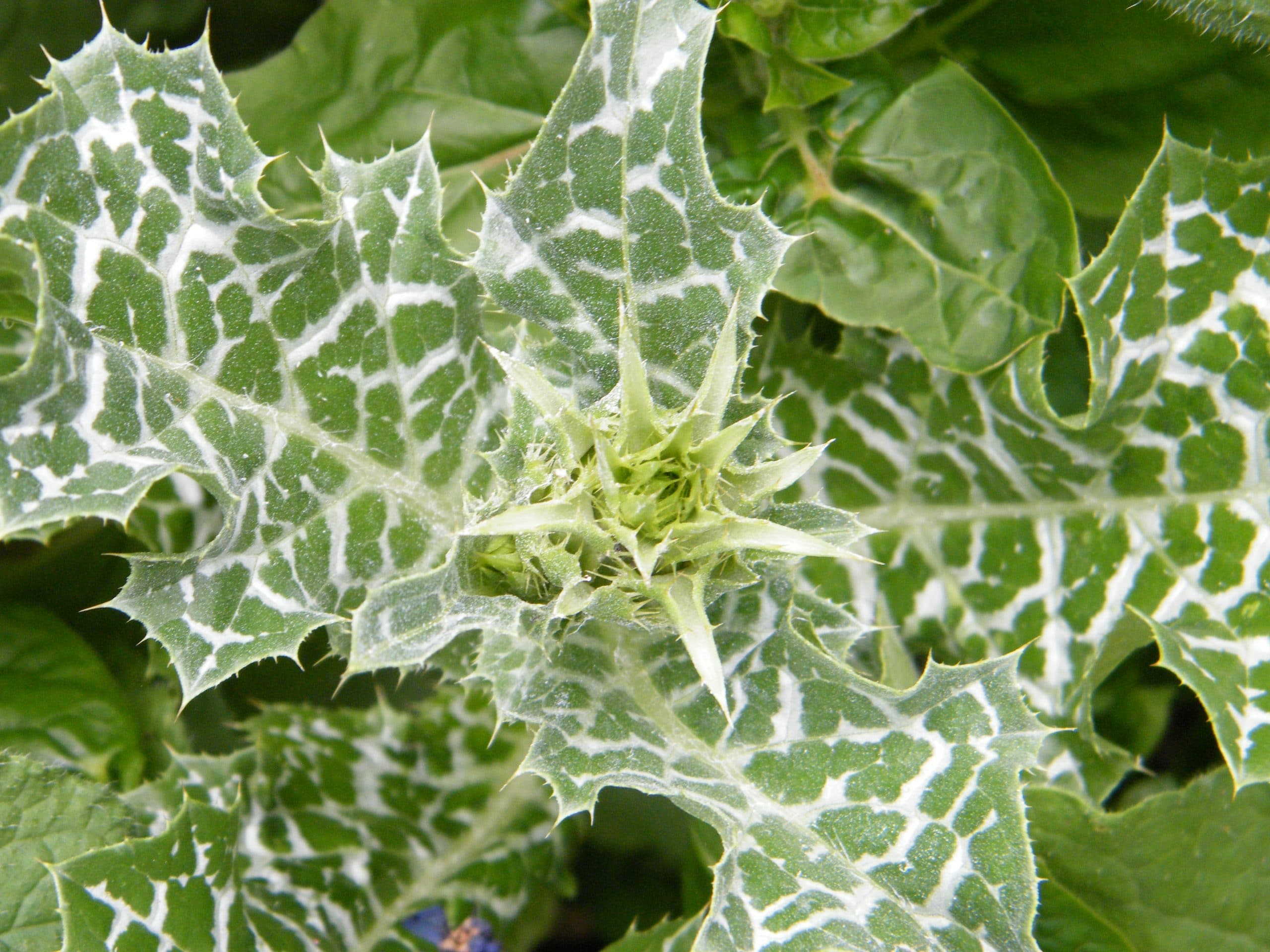 Milk thistle, Silybum marianum leaves are very distinctive, and this herb self-seeded its way from someone else’s garden into my veg patch – presumably via a bird! I live on the South Coast of the UK, and it is thought to be a native of this area although it has naturalised in various places around the World. Milk thistle is cultivated as an alternative medicine associated with protection of the liver, although clinical trials are ongoing. 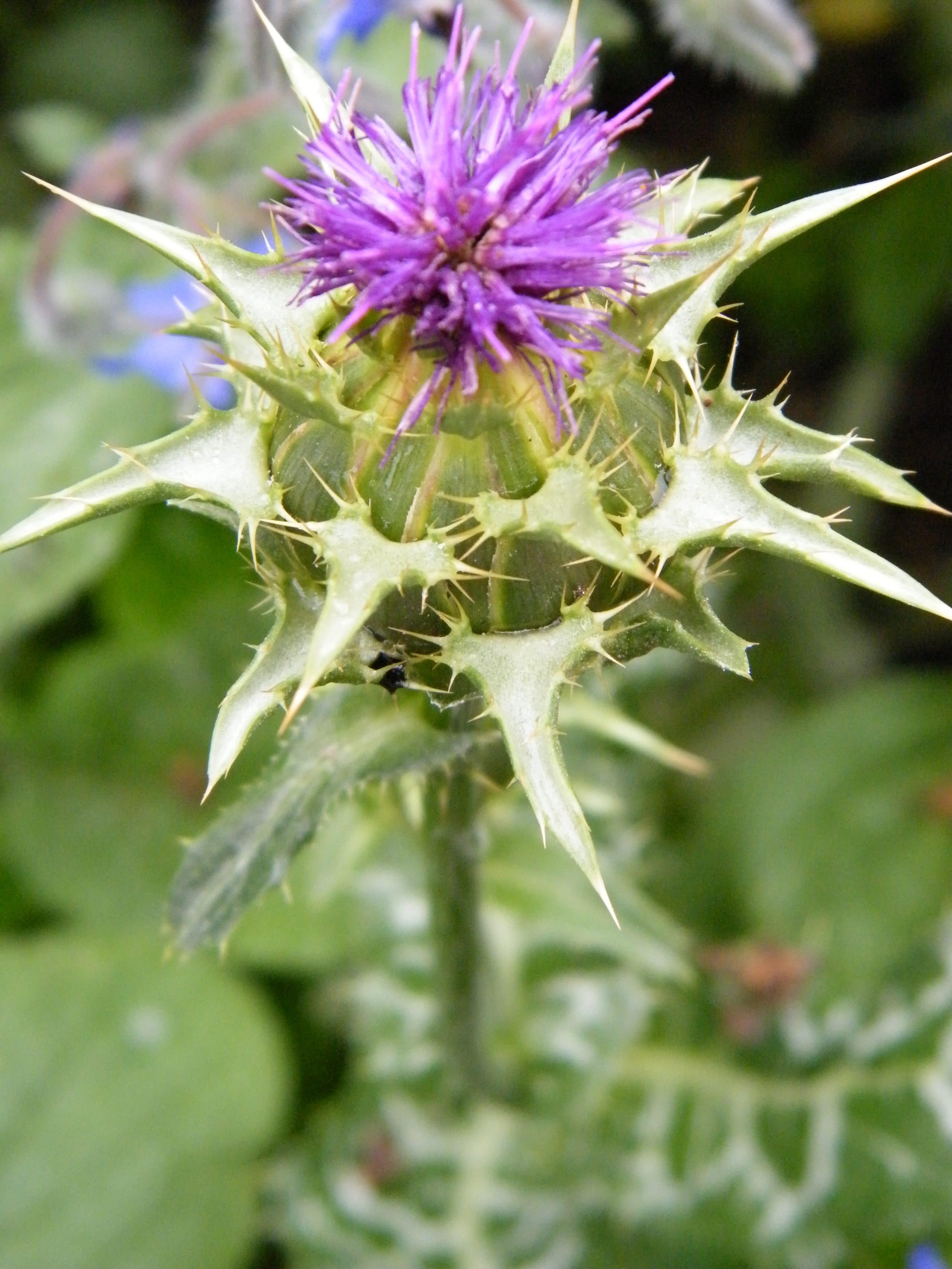 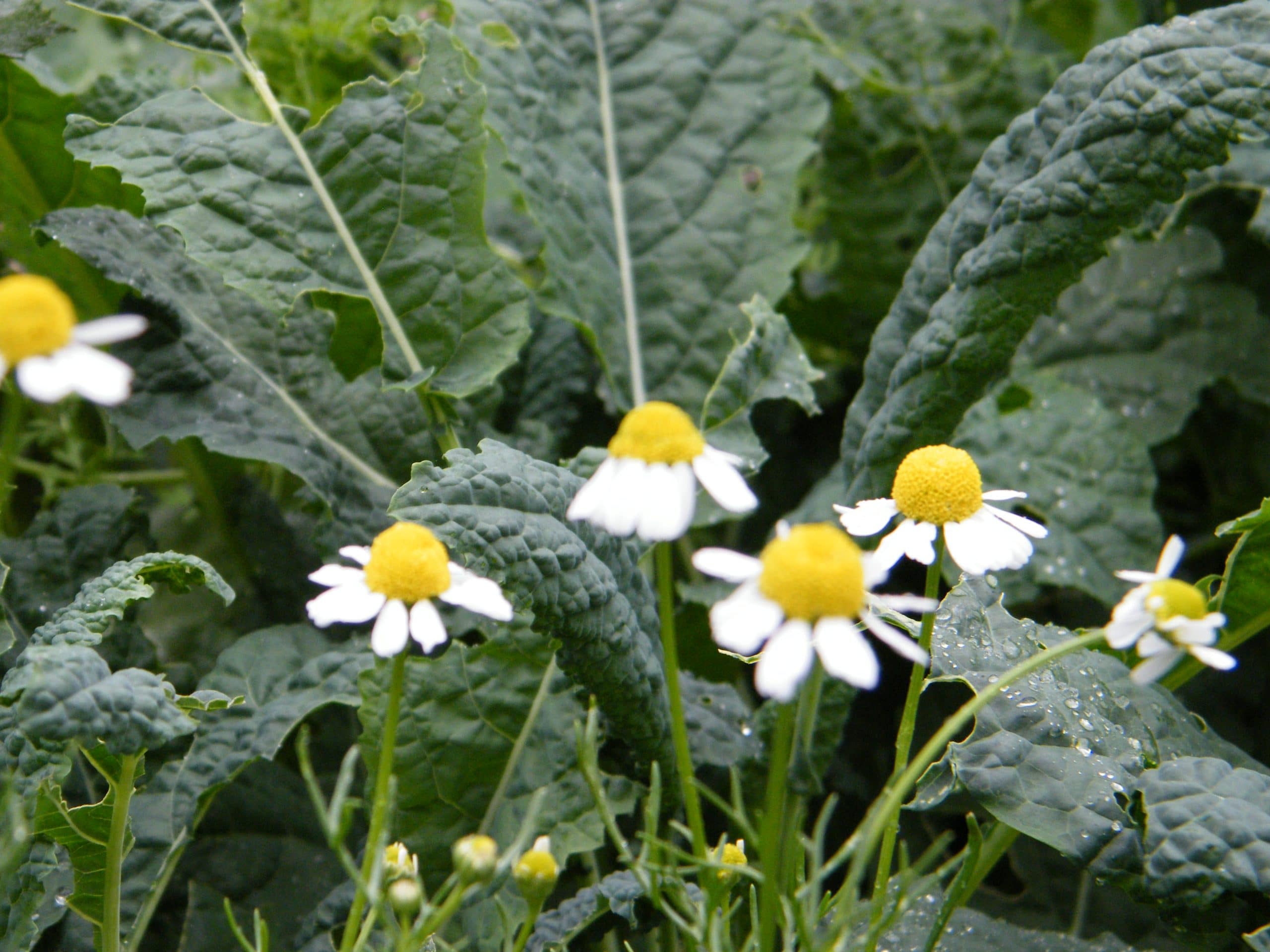 Chamomile comes up every year in my garden in among the kale and I’m pleased to see it, drying the flowers for tea year-round. This variety of Chamomile flower is Matricaria recutita (syn. M. chamomilla), known as German or blue chamomile. 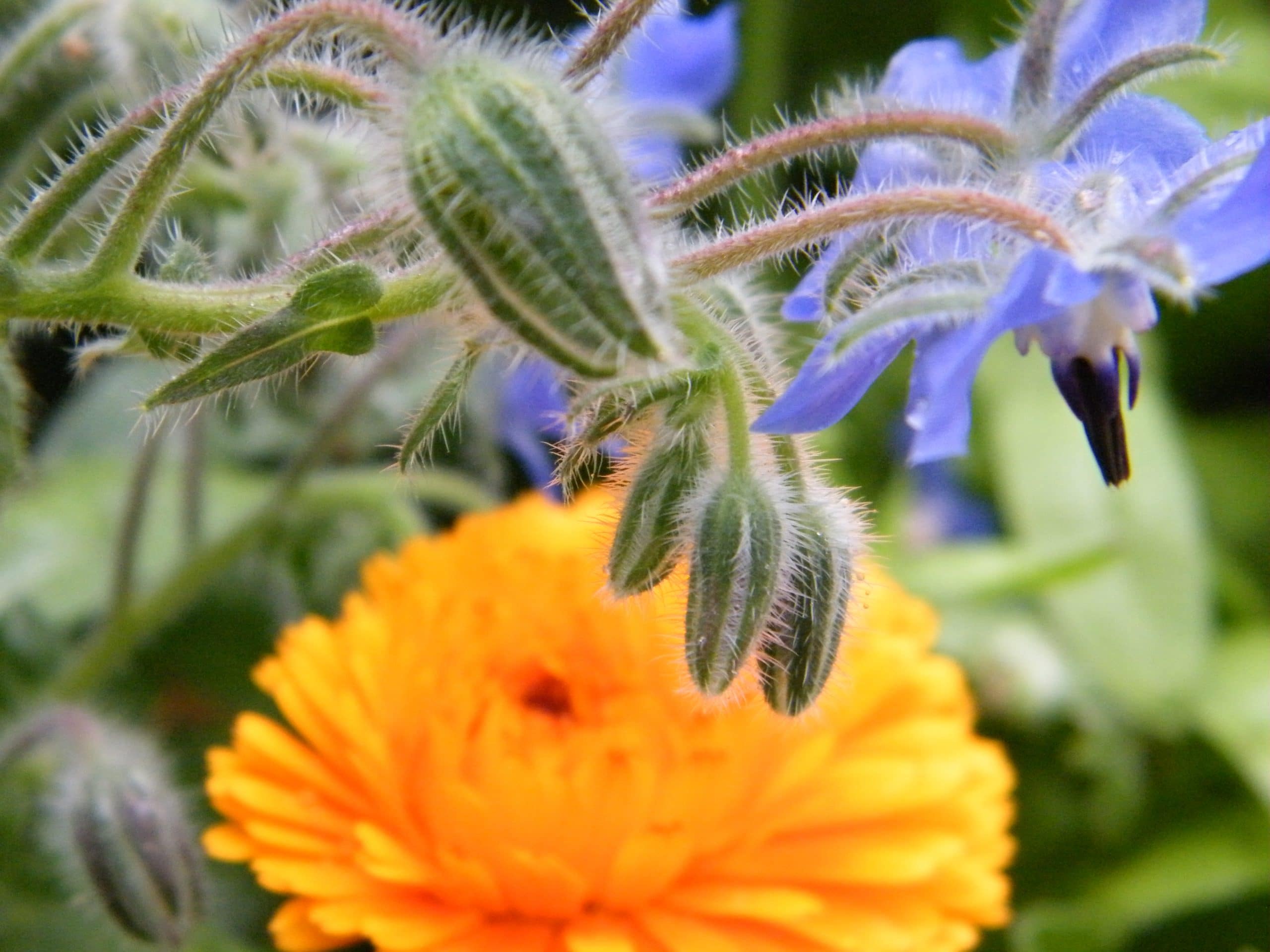 Borage and marigold both seed themselves around happily. I leave the borage or starflower, Borago officinalis to flower wherever it germinates and use it fresh from the plant as a decoration on summer punch. Current scientific investigations include its use as an anti-inflammatory. Seeds of the pure white strain of this flower are now commercially available, but I personally prefer the more common vivid blue seen here.

My pot marigolds, Calendula officinalis predictably self-seeded themselves in a pot, so I rescued them, using them as an edging plant for my vegetables. I dry the calendula flowers and petals and add them to potpourri. The petals are a bright additive to salads, but in the American Civil War and World War I, calendula flowers were used when dressing wounds to promote healing.

Fennel in the borders 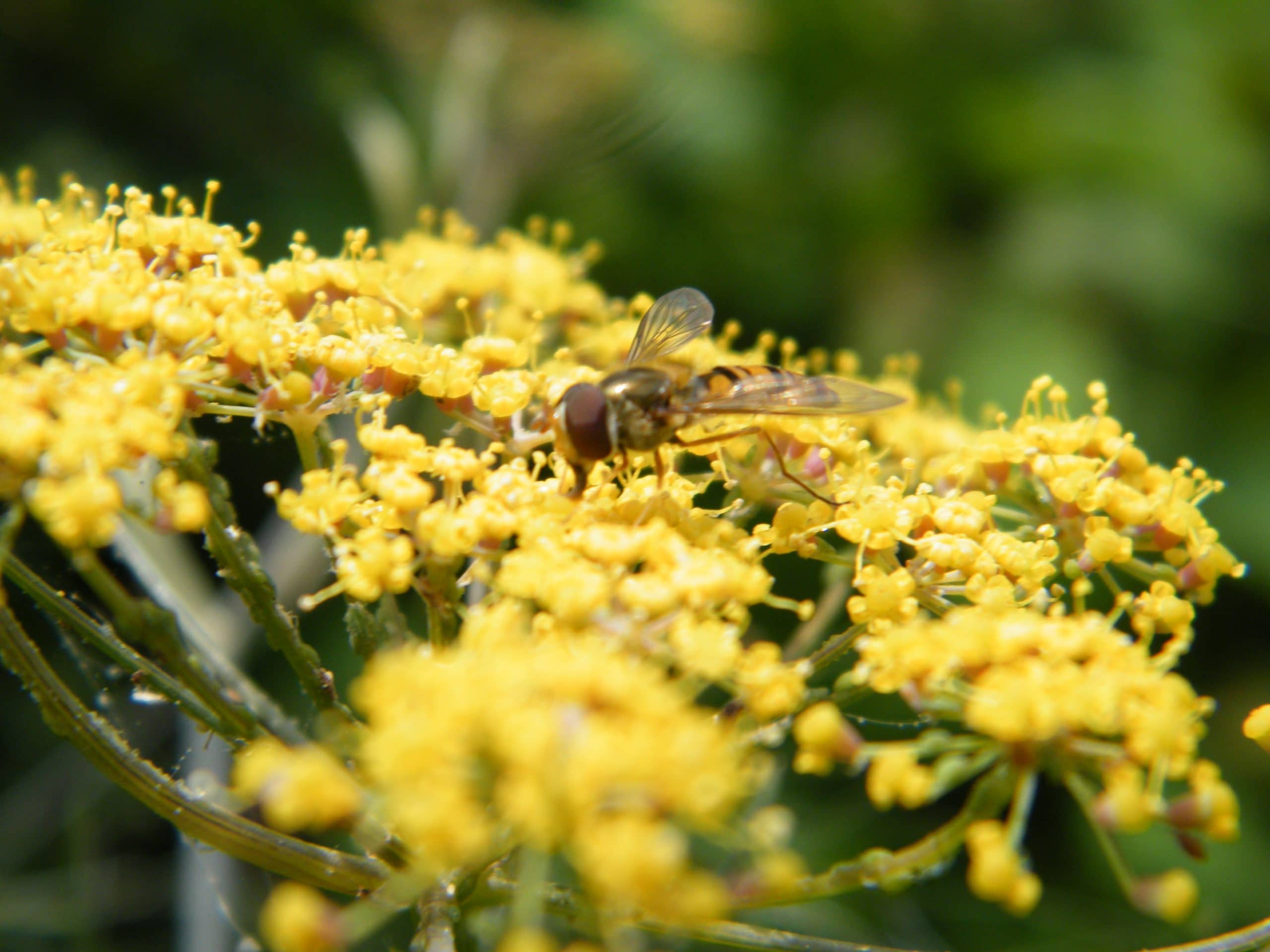 Pollinators such as hoverflies love fennel flowers, Foeniculum vulgare, because they form a flat landing pad. I very much enjoyed a talk by Herb Society President Toby Buckland recently, in which he pointed out that fennel secretes a chemical which deters the growth of nearby plants. This plant was self-seeded in the border, so I soon had my husband onto the job of weeding it out (see below)!

Fennel has an aniseed flavour and can be eaten as a vegetable or herb, and the seeds make a pleasant tea which refreshes the digestive system. 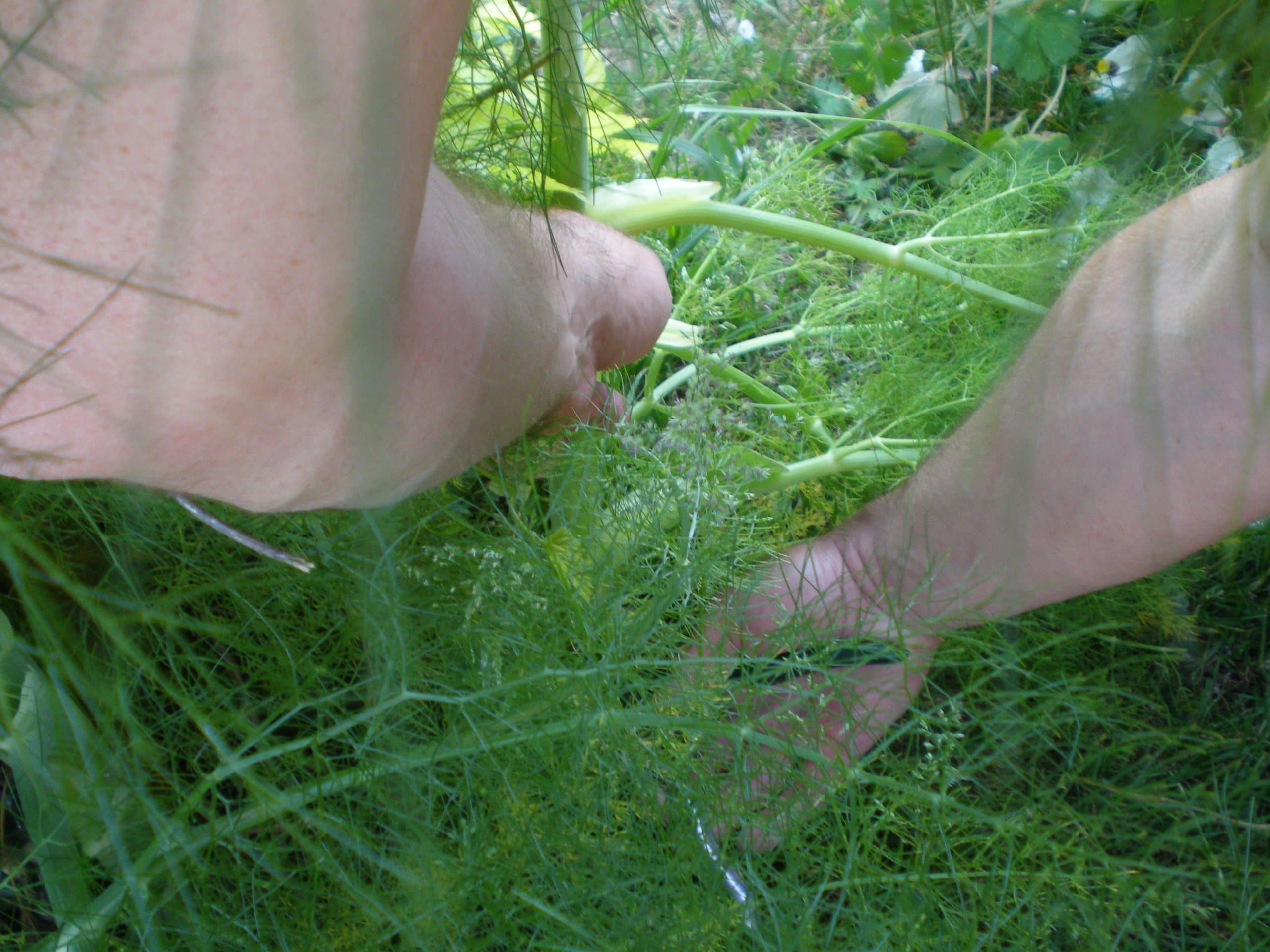 There are many more self seeding herbs including lavender (especially if grown in gravel), marjoram (it grows in cracks in my patio), and lemon balm to name just a few. So don’t be too quick with the hoe, you might be missing an opportunity!

Read more about herbs in my Sussex garden